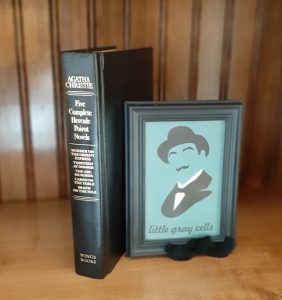 Agatha Christie! 😻 While the fam watched a violent action movie (blech), I treated myself to the 2017 version of “Murder on the Orient Express”. ⁠
⁠
It was great! It took me a while to get used to someone else portraying Poirot, though. David Suchet will always be my fave. 😍⁠
⁠
What mysteries have you been watching or reading to keep busy during the lockdown?⁠

Here is the blurb for “Murder on the Orient Express”:

“Just after midnight, a snowdrift stops the Orient Express in its tracks. The luxurious train is surprisingly full for the time of the year, but by the morning it is one passenger fewer.

An American tycoon lies dead in his compartment, stabbed a dozen times, his door locked from the inside. Isolated and with a killer in their midst, detective Hercule Poirot must identify the murderer – in case he or she decides to strike again.”
⁠
#agathachristie #herculepoirot

← Wednesday with Wendy - Answering Questions – How is the Writing Going? (Or, What I Really Do All Day) Ask Mrs. Merrick... How Do I Find Mr. Right? →